For years, experts across every major industry have been predicting the death of Adobe Flash due to its browser- and desktop-slowing effects and security challenges. Many credit Steve Jobs for starting the movement to end Flash use in 2010 when he published the lengthy open letter titled “Thoughts on Flash,” which detailed six reasons why Apple chose to not allow the player on their devices. This marked the beginning of the end.

Although the use of Adobe Flash has been on a significant decline since Jobs stated his case, 2015 has especially seen strides to expel its existence. In January, YouTube officially switched its default video player from Adobe Flash to HTML5, and last month Mozilla blocked Flash players on Firefox after security vulnerabilities were revealed. Chrome recently released an update to their browser to minimize Flash content in order to improve user experience; the browser is currently set to run all plug-in content but will automatically switch over to detect and run important plug-in content only as early as September 1. Testing of this new feature reveals that Flash-based advertising pauses when the “important plug-in content” setting is turned on. With Chrome accounting for 37%–48% and Firefox roughly 16% of the U.S. browser market, there is a good chance that Flash-based web banners will go unseen this fall.

And if that wasn’t enough, even Facebook’s new chief information security information officer tweeted in July, “It is time for Adobe to announce the end-of-life date for Flash and to ask the browsers to set killbits”—meaning instructions to disable the software. I think it is safe to say that the internet’s most influential have placed the last nail in Adobe Flash’s coffin.

Not only is there the possibility that banners in costly media buys will go unseen, but there are compliance risks if the ad does not produce content in the fashion it was submitted. Marketers need to take steps immediately to replace all Flash web banners with HTML5 as soon as possible, ideally before the September 1 Chrome update is turned on. 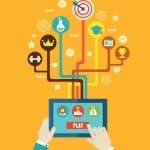 The Play’s the Thing: Gamification as Direct Marketing’s Latest and Greatest Involvement Device