Key Insights to Including African Americans in Your Marketing Strategy

For our latest installment of our inclusivity series, we interviewed Dr. Jason Chambers about the complexities and nuances of marketing to the African American community. Dr. Chambers is an expert on the African American consumer market, Professor at the University of Illinois, and author of the book Madison Avenue and the Color Line: African Americans in the Advertising Industry. Read on for his insights:

Q: Please give us a little background about yourself, speaking to your deep knowledge and expertise on the topic of marketing and advertisement and how this pertains to the African American population. 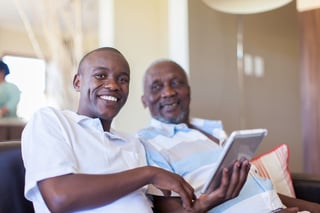 Q: Give us some background information about the African American population so we can have a better understanding of who they are.

Therefore, we should think about the African American population based primarily on self-identification. Here, I mean the population that self-identifies as African American (also “black”). Based on the aforementioned criteria, we’re talking about a population approaching 50 million people. A population whose birth rate, while slowing, continues to exceed that of white Americans. Within the next 35-40 years, the black population will be nearly 20 percent of the nation’s population.

And we’re talking about a primarily urban population. Lastly, while we can see the beginnings of a shift of the African American population back to the South, blacks remain a primarily northern group.

Furthermore, the educational rates in terms of undergraduate degrees among blacks, particularly for black women, continue to rise. And blacks continue to have one of the highest rates of television consumption and usage of digital communications of any group in America.

Q: What are some (if any) cultural characteristics that could be considered omnipresent among the African American demographic?

A: Within such a large population, it’s difficult to define omnipresent characteristics. However, there are two primary characteristics that come to mind: Religion and Respect. African Americans continue to have one of the highest rates of church attendance of any of America’s major demographic groups. The church, specifically the “Black Church” has long been at the center of the black community and has played a key part in the individual lives of black Americans. Long before the Civil Rights movement (and certainly during and after) the black pastor (male and female) continues to serve in an important and visible leadership capacity in the black community.

And alongside religion is the issue of respect. Respect from their fellow American citizens, respect from those in authority and leadership, and respect from those who want the patronage of black consumers. African American advertising professionals have long argued (and demonstrated) that one of the first things black consumers evaluate in marketing communications is whether the marketer is respectful of black consumers. Do they seem to understand the black community? Do they evidence a respect for black culture? For black families and children? For black men and women? Do they seem to include only the stereotypical representations of black people: loud black women, angry and criminally-oriented black men, blacks singing, dancing and playing sports? Do the marketing communications show respect for black families? Do they show blacks in a leadership role or as worthy of being admired for reasons other than athletic ability? Only once those communications, in graphics, copy, tone and situation, have been judged respectful will they be evaluated for their consumer message. Without that respect, the marketing communication will fail.

Q: How could the understanding of these attributes be critical in developing marketing insights to reach this demographic

A: Understanding the African American insistence upon respect is critical to successfully selling products to them. Can a brand make a “mistake” in their communications and still be successful? Yes, but only if that brand has a history of being part of the black community. In other words, if a brand has been judged as respectful in the past and then makes a mistake, that mistake is much more likely to be forgiven than if it has not.

Q: Any marketing best practices marketers should be aware of to ensure inclusion and a level of understanding when marketing to African Americans? Or when trying to ensure they include this part of the population?

A: The best practice for African American consumers is to remember, as advertising legend Tom Burrell often remarked, that blacks are not “dark-skinned white people.” In other words, that though blacks may share some of the same demographic realities (economic, social, geographical, etc.) as whites, they don’t always share the same view of life. Instead, marketers should remember that, even in 2017, racial considerations can’t be overlooked or ignored. Remember that black consumers are part of your consumer market and that they are watching to see how (or even if) they are included in your advertising messages. Therefore, it continues to be important to include individuals with experience or knowledge about African American consumers on your marketing teams. Do those persons have to be African American? No. But they do have to have the empathy, knowledge and cultural competency to advise you on how best to reach African American consumers.

Q: Anything else you think we should add to help marketers understand this segment, perhaps gleaning from your studies and publications?

A: I think the final thing to add here is to remind marketers that understanding black consumers demands the same amount of insight and effort as that done for other consumer groups. Don’t simply overlook them or presume that they’ll be attracted to your communications in the same ways as other consumers. Don’t make the mistake of presuming that blacks’ racial filter no longer exists. As the political campaigning over the last 18-months and the ongoing debates regarding the police and African Americans (primarily identified by the Black Lives Matter movement) have demonstrated, race continues to be a very salient, personal, and potentially divisive factor in our country. Therefore, you must continue to make it part of the consideration set for your marketing messages.

Any questions or thoughts, please leave us a comment below. We thank Dr. Chambers for his time and expertise on this subject.

3 Powerful Insights to Include Women in Your Next Marketing Campaign